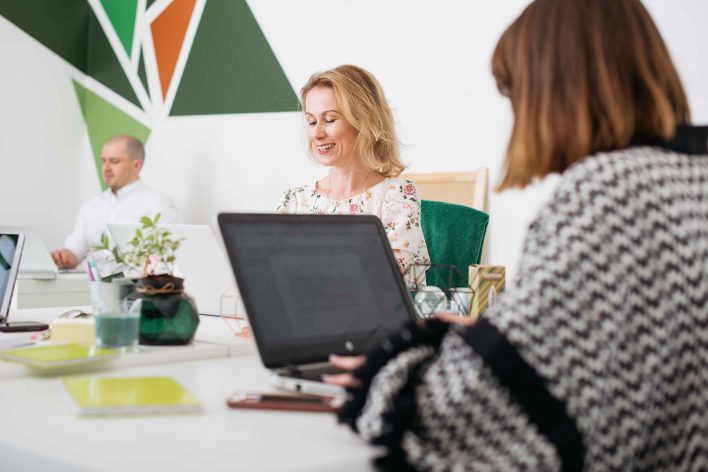 Millennials, as you may have heard, are changing the way we work.

Having grown up during an era in which overwork was glamourised – where 80-hour working weeks merited a pat on the back instead of a concerned intervention, and where productivity was measured on the clock as opposed to by impact – a backlash was somewhat inevitable.

Sure enough, this ‘experience-led’ generation has re-evaluated these priorities in the wake of the global recession. And now, as they ascend into positions of increased power and influence within the working world, their differing philosophy is coming to the fore.

It’s in this vein that the co-founders of Far From Avocados – a creative content marketing agency with a team of five, established in mid-2017 – made the decision to put mental and physical wellness at the core of their business model from day one.

“Talent is the heartbeat of any company,” says co-founder Amy Cannon, who also researches the impact of mental health marketing in society at a PhD level. “Particularly at such an early stage in our journey, our people are the co-creators of our brand; and they’re the very people who make the brand come alive for our clients, our collaborators, our prospective hires and everyone else.”

She believes that it’s the role of any employer to ensure that this people-first approach is realised.

“The wellbeing of our brand and our people are completely interdependent. So, on top of it just being the right thing to do, it’s our duty as co-founders to create an environment and implement structures where people can be at their happiest and best.”

On a tangible level in Far From Avocados, these include creative brainstorming spaces, financial incentives for voluntary upskilling, confidence and public speaking training as well as paid gym memberships and mental health packages – which they have collaborated with MyMind on.

But, Amy says, these perks count for very little unless they’re supported by a culture that facilitates and complements their use – both directly and indirectly.

“There are so many companies out there who have a pool table at the centre of their beautiful offices, but the internal culture doesn’t actually give employees the opportunity to use it since they’re so overworked,” she says.

“Similarly, there’s no point in us offering gym memberships if we’re going to be putting so much on the team’s plates that they can only afford time to grab lunch in a local convenience store and eat at their desks.”

“In our agency, creativity, lateral thinking and strategic intelligence are not just our core values – they’re essentially the products we sell. No number of perks, freebies or nice-to-haves will help us get these out of our team if they’re not in the right frame of mind to produce those goods.”

“We do this by providing a high but reasonable level of expectations, and by nurturing the team we have. Our people need to be challenged to give their best – but that challenge needs to be matched with support, education, and an environment where risks are okay.”

“We’re very much in growth mode at the moment, and targets and pitches and deadlines are coming at us left right and centre – keeping the creativity flowing in those conditions doesn’t come without its stresses and strains, so we had to work to facilitate this.

“To start with, the physical environment is important. Our meeting rooms are beautiful, colourful open spaces full of whiteboards and colourful post-its to facilitate brainstorming and free flow of ideas,” Amy says.

While this approach to workplace wellness has undeniable short-term benefits for the people, as well as the agency, there is also a longer-term benefit: reduced burnout and a reduced level of staff turnover.

“Burnout is rife in agency land, that won’t really surprise anyone,” says Amy. “And that’s not just a problem for the people, but for the sector at large as well.”

“It’s difficult to change a long-standing culture in older agencies – their margins, their mark-ups, their hourly rates, their delivery roadmaps, everything, are all built around what they’ve done in the past,” she explains.

“Their ability to turn a profit, or even to stay in business, is built around getting ‘that little bit extra’ out of people – unless they go back to clients and tell them the same job as they did last year is going to cost 50% more this year, which isn’t an easy thing to do.

“But that’s not sustainable, and ultimately it ends to high staff churn, too many hours invested in recruitment and training, low morale and work that’s just not where it needs to be in terms of quality or innovation.

“Having the ability to address this – and avoid this – from day one was key.”

Of course, it’s not easy to strike that balance between getting the most out of a team and pushing them to the point where they have nothing left to give. But Amy believes that little things, like the ability to fully recharge and an extra day’s leave per year to be taken on or near each staff member’s birthday, can make all the difference.

“Businesses need to incorporate three dimensions of performance into their plans and into their modus operandi: social, environmental and financial. Not just the third one, as so many do at the moment.

“Right now, that’s a stand-out reason to attract talent,” she says. “But very shortly, you won’t get a look-in – for recruitment, for performance, for anything – if your people aren’t put right at the core of your business model.”

The truth about trauma