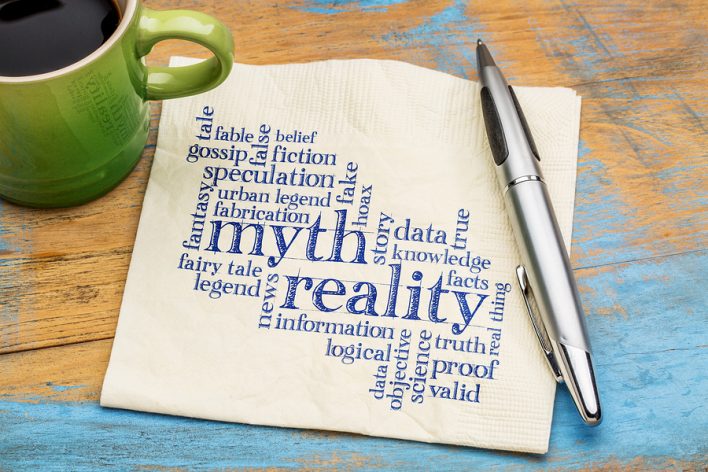 What is mental health? When does mental health turn to mental illness? This is a topic that we are seeing again and again in the media and an issue which is so prevalent in our society with 1 in 4 people experiencing mental health problems in their lives. Given the increase in talks around this, why are there still so many myths surrounding mental illness? It’s time to lay all our cards on the table and make fact out of fiction.

Myth Number One: Children do not suffer from mental health issues.

Research published by the Royal College of Surgeons in Ireland (RCSI) in 2013 revealed that 1 in 3 children aged between 11 and 13 years of age experience mental ill-health at any given time, and many of these children actually experienced more than one-lifetime mental health disorder. By the time the child reached 24 years of age, it is estimated that over half of young people in Ireland will have experienced a mental health issue at some time in their lives. The most common forms of mental illness experienced by young people is anxiety and depression. In 2016, 22% of the clients that spoke to professionals in MyMind were under 24 years of age.

Myth Two: It’s the parents' fault if their child suffers from a mental health issue.

While an unsupportive family environment can have an effect on a child’s mental health, there is so much more to consider. Problems can generally be boiled down to a combination of nature and nurture, the interaction between our genetic make-up and our social environment. Issues such as bereavement, physical ill-health and work/financial issues were reported as having an impact on mental health in a report published by the HSE in 2007.

Myth Three: People with mental illnesses are crazy and dangerous.

This is a dangerous misconception among the Irish population, with 28% of people agreeing that people experiencing mental illness are crazy and dangerous. However, this is not true. Some of the most common mental health issues include depression and anxiety, with 44% of clients who attended MyMind Centre for Mental Wellbeing in 2016 presenting these issues. People with these disorders often experience negative thoughts and low moods which can impact on their lives, violent outbursts are not part of the diagnostic criteria for either condition (DSM 5).

Myth Four: People who have Schizophrenia are dangerous and violent.

Thanks to how Hollywood portrays people with mental illness, there is a misunderstanding about what schizophrenia is and what kind of characteristics are involved with it. The truth is that schizophrenia is a collection of symptoms that are both positive and negative. While it does involve hallucinations, delusions and confusion, these symptoms do not necessarily result in dangerous behaviour in everyone that experiences this condition, in the same way, that not everyone who needs stitches will get an infection. It can also be characterised by a lack of emotion, social withdrawal and poor memory.

Myth Five: People should just snap out of depression.

Depression is not just characterised by low mood, it is also affected by neurotransmitters. These are chemicals in the brain that transmit messages from one neuron to another, telling our brain to act in a certain way. For example, the release of the neurotransmitter serotonin tells our brain that we are happy. Depression has been linked to the impaired production of this neurotransmitter as well as dopamine and norepinephrine, which control the bodies sexual drive, mood and reward-seeking. This is why we can’t just “snap out of depression”, as it’s difficult to alter our brains chemistry without help.

Drugs and alcohol alter the brain’s reward system and result in distinct physiological damage when used and abused long-term. When we do something we enjoy, such as read a book, play football or talk with friends, the brain releases reward chemicals such as dopamine and glutamate. This release allows us to feel happy on the inside. This reward circuit is damaged in those who suffer from addiction. Drugs damage the brain’s natural reward system by mimicking neurotransmitters and the brain works overtime to generate a reward sensation. An addict’s natural ability to sense joy is alarmingly low, and so they can turn back to drugs in an attempt to generate this feeling again.

Myth Seven: Mental illnesses don’t exist in Ireland because we all have the craic.

Myth Eight: People with mental illness are a burden in the workplace and shouldn’t be allowed to work.

An individual working in a positive environment in a role they like is unlikely to miss any more days of work than their colleague who does not suffer from a mental illness. There has been an increase in the attempt to change the view of mental illness within the workplace. Many organisations are now providing courses to boost mental wellness at work such as the MyMind at Work programme.

Myth Nine: You can only have one mental illness at a time.

Myth Ten: You can never recover from a mental illness.

Treatment is very effective for mental illness but it is important to find what works best for you. Oftentimes certain forms of talk therapy will be sufficient, such as Cognitive Behavioural Therapy, Gestalt therapy or Person-Centred Therapy. Others might find Mindfulness effective, while others might find a combination of therapy and medication from a psychiatrist effective. Don’t lose hope if the first path you take doesn’t work out long term, sometimes it takes a little trial and error to find what suits you, and that’s okay!

Making January your own

Self-Care: Good sleep as part of mental health recovery
2021 Webinar Series: Meditation and Mindfulness
Why is acceptance important for our mental health?
How to access support networks in your community